COVID-19 Update – In line with the latest government guidelines updated on the 4th January 2021 we are currently operational and open for business; we will be operating on a strict COVID-19 SECURE basis to protect both our staff and customers. Please read our COVID-19 Sales Safe Guide for more information.

History of the West Country Carnival

Following on from our previous blog, here is an interesting brief over view of the history of the west country carnival, with all of the information you need to know.

Carnival is one of the unique yearly events that defines the Somerset region. As one of Somerset’s leading home improvement companies, Majestic Designs is incredibly proud to support this West Country tradition.

What is West Country Carnival?

On paper, the West Country Carnival is defined as a parade of illuminated floats designed to raise money for charity ever year. But it’s much more than that. It’s a West Country tradition that dates back centuries and that reflects an important, and often overlooked part of local history.

To those who haven’t witnessed it first hand, a West Country carnival is surprisingly difficult to describe. Picture painstaking decorated carnival floats drawn by a tractor, loud music and teams of hardworking dancers adorning said float, and you’ll have a rough idea of what the event looks like. What it feels like though is something you can only experience once you’re there.

It’s no coincidence that carnival in the Somerset region is celebrated close to November 5th: Bonfire Night (also known as ‘Guy Fawkes Night’). The roots of West Country carnival date back to the early 17th century when the bitter conflict between Protestants and Catholics in English society was raging. Surprising, the tradition of carnival results from the infamous foiled Catholic plot to blow up the Houses of Parliament. 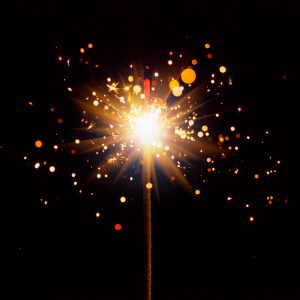 We are all probably familiar with the story of the Gunpowder Plot: how Guy Fawkes, a member of a secret band of Catholic revolutionaries who wanted to put an end to their persecution at the hands of Protestants, smuggled hundreds of barrels of gunpowder into the storage cellars under the Houses of Parliament and planned to blow them up on 5th November 1605, assassinating the Protestant king, James I. The plot was foiled due to a last minute tip-off, and Guy Fawkes and his conspirators were hung, drawn and quartered.

After hearing news that the plot was foiled, celebrations spontaneously erupted across the country. One of the places where these celebrations were strongest was the West Country, and particularly in Somerset: a historically strong Protestant region.

The origins of the Somerset Carnival in Bridgwater

The Somerset town of Bridgwater in particular had a long history of being a radical Protestant area. During the Civil War, the town had supported the Protestant Parliament against the Catholic king, Charles I, and had been besieged by a Royalist army. Fast forward to 1685 and you can still see the region’s fiercely Protestant pride evident in the thousands of followers from Somerset who flocked to the Protestant Duke of Monmouth’s cause, which culminated in the Battle of Sedgemoor (a few miles away from Bridgwater).

News of the foiled plot was ecstatically received here. This was because of the fact that the true instigator of the plot, a Catholic Jesuit Priest called Robert Parsons, had been born in Nether Stowey, a village a few miles to the south west of Bridgwater. Like many other towns, Bridgwater made a bonfire to celebrate- but this one was different.

A large wooden boat was hauled on to the Cornhill in the centre of the town and was filled with a hundred barrels of tar and anything else that might burn. This was then set on fire, and a gang of revellers paraded down the high street carrying effigies (or ‘Guys’, named after the unfortunate Guy Fawkes) of the Gunpowder Plot conspirators, including Parsons, which they then threw on top and burnt.

Today’s carnival parade, as we know it, has its origins in this ceremonial parade to the bonfire.

As the years passed, the parade and bonfire became an annual event in the town that spread to others in the region, including Taunton, North Petherton, Glastonbury and Shepton Mallet. It began to become increasingly elaborate; with costumes, music and fireworks. This celebration gradually developed into a popular tradition throughout the region, with clubs forming to see who could create the best display within the procession. 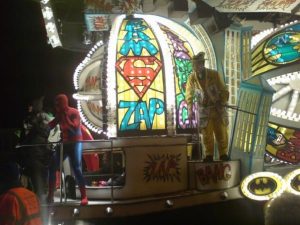 Horse-drawn carts lit by candlelight were used at first and as the years passed and technology developed, steam-powered lorries and eventually tractors, were used to pull huge floats lit by hundreds of electric lightbulbs.

4 local carnival circuits developed across Somerset and the West Country, which are the basis of carnivals in the region today; the Somerset County Guy Fawkes Carnival Association Circuit, the South Somerset Federation Of Carnival Committee Circuit, the East Devon Circuit and the Wessex Grand Prix Circuit.

As we’ve seen, Bridgwater has an historic claim to being the place that carnival was born in the West Country, so it’s fitting that the town celebrate it in a big way! The carnival procession in Bridgwater is considered to be the biggest and the best, and it’s for this reason that it is the first carnival procession in the Somerset County Guy Fawkes Carnival Association Circuit.

Bridgwater doesn’t just celebrate carnival with the procession though. Although the tradition of using boats to create bonfires was eventually stopped (namely because there was an increasing shortage of old wooden boats to use and many carnival revellers under the influence began to burn good boats instead!) eager attendees improvised a new way to celebrate carnival in a typically Bridgwaterian-fashion: with the Squib!

A squib is essentially a pole with a firework mounted on the end: think of it as an amazingly large firework sprinkler. It is held aloft over a person’s head and sends a large, sustained shower of sparks up into the air. Traditionally after the carnival, revellers head to the high street which is lined with hundreds of squibbers to see this historic display.

There’s no denying that carnival is an important part of Bridgwater’s identity. The infamous day after Bridgwater carnival, which was traditionally celebrated on a Thursday night, has even gained its own name in the local vernacular: Black Friday, named for the hangovers that many of the towns citizens nursed after the festivities.

The modern Somerset carnival is all about raising money for good causes in the region.

One of the draws of carnival is the competitive aspect of it. Different local clubs compete to win prizes and awards for the best floats, dance routines and displays. Carnival clubs normally design a float around a particular theme. Competition is fierce, and many clubs spend thousands of pounds, which they raise through donations and sponsorship, kitting out their floats with high-tech light displays, moving sculptures and complicated dances, all in the hope of winning the coveted trophies.

The Somerset County Guy Fawkes Carnival Association Circuit is perhaps the most popular carnival route in the West Country. It goes through all the major towns in the region such as Bridgwater, Shepton Mallet, Glastonbury and Weston super Mare. Bridgwater is the first carnival date, held on the first Saturday in November; Weston-super-Mare is held on the following Friday; North Petherton on the second Saturday; Burnham-on-Sea on the following Monday; Shepton Mallet on the following Wednesday; Wells on the third Friday; and Glastonbury on the third Saturday.

Find out more about Majestic Design’s range of high quality windows, doors and conservatories by calling us on 01934 741 294 or by sending us an email.

With over 2,900 independent reviews on Fairtrades.co.uk, Majestic Designs are proud to have earned an above 9.49/10 rating in customer satisfaction Click to find out more

“The fitting team were a credit. Clean, efficient and pleasant to know. Site left in a very clean state. Thank you.”

“All round excellent service. Used you in our previous home and was delighted with both installations you have done for us. Thank you.”

“I cannot fault anything & best thing I ever did. I am relieved & happy that I have attractive doors & windows. Thank you.”

“Efficient, tidy, friendly and good workers. Would have no trouble recommending their work.”

“We are very pleased with the product and service.”

“I had been putting off having the windows replaced but actually it was really easy & not too disruptive at all. Thank you & the …

“Your installation team worked in a tidy methodical way. They left no mess and rooms were left vacuumed and neat. A special thank you to …

“I wanted to let you know how delighted I am with the new windows installed by your company recently. Everyone with whom I have had …

”Due to the weather conditions on the days of installation your team performed outstanding work and should be rewarded accordingly.”

“All the workmen that came did a good job, kept everything clean & tidy. Pleasure to have them here.”

“We will certainly call you if we require further windows, and will be recommending you to all. The two window fitters were very good.”

“From start to finish everyone who we dealt with at Majestic, without exception, were courteous, professional and knowledgeable. Would definitely and use again when we …

“I am writing to confirm how delighted my husband and I are with the installation of our windows. Your men worked extremely hard and did …

Serving clients across Somerset and the South West

Majestic Designs install quality double glazing products throughout Somerset. From Taunton to Yeovil and Weston-super-Mare to Wells; our insistence on quality installations and outstanding customer care remains the same. With our factories and showroom in Cheddar, we are conveniently located in the heart of Somerset, with easy access to the surrounding towns and villages. As part of the local community, we are dedicated to improving the lives of all our customers and by employing a local workforce we are investing in the future prosperity of the area.